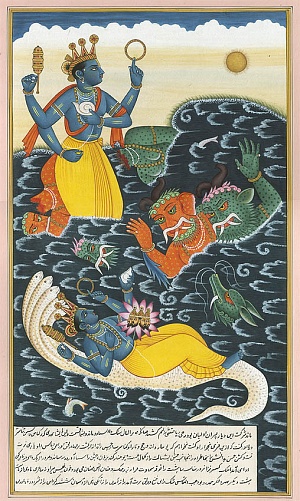 Kaitabha is the demon killed by Vishnu; together with his twin brother Madhu personifies mental vices.

The story of the victory of Vishnu over Madhu and Kaitabha is described in the Devi-mahatmya and Devi-bhagavata Purana.

During Pralaya, in the waters of the Cosmic Ocean, Lord Vishnu reclined, residing in the dream of Yoganidra. From His earwax appeared two terrible asuras – the demons Madhu and Kaitabha. They saw Brahma, the Creator God of the world, and set out to kill him. The demons began to climb the lotus stalk on which Brahma was seated. Then Brahma began to praise Yoganidra – the Goddess Maha-maya – the Force, which forces Vishnu to sleep. Then praised by Brahma, Goddess came out of Vishnu, prompting him to awaken. Being awaked, Bhagavan Vishnu fought with them in hand-to-hand fight for five thousand years. The demons, intoxicated by their own power and deceived by Mahamaya, said to Vishnu, "ask for any gift from us". Vishnu replied: "I want you to fall down from my hand now". Then the demons started crafting: "Kill us, but only where the land is not covered with water". Vishnu laid the demons on his ankles and cut off the heads of with Sudarshana Chakra (disk).