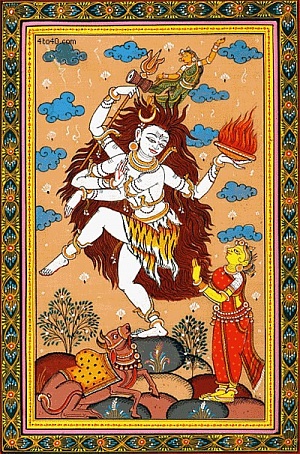 "frantic dance", comes from the great dance of Shiva in the form of Nataraja.

It symbolizes the cosmic cycles of creation and destruction, as well as the daily rhythm of birth and death. In a broader sense, a fierce, energetic dance performed by a man. A more subtle female dance is called lasya – from lasa, "alive".

Shiva's dance consists of the ever-flowing combinations of His five powerful actions, panchakritya:

1) Srishti: creation or emanation – symbolized by His upper right hand extracting Paranada from the drum-damaru, the Primary Sound, from which the rhythms and cycles of creation originate;
2) Sthiti: preservation, maintenance – symbolized by His lower right hand in a gesture of blessing, abhaya-mudra, which means “do not be afraid”;
3) Samhara: destruction, dissolution or absorption – symbolized by fire in His upper left hand, making the gesture of ardhachandra-mudra ("crescent moon");
3) Tirobhava: the grace of concealment, illusion – the energy that hides the truth and thereby gives the opportunity for experience, growth and the ultimate realization of fate. She is represented by His right foot trampling on a prostrate figure (Apasmarapurusha or Muyalaka), symbolizing ignorance, or anava;
4) Anugraha: divine grace that bestows knowledge and breaks the fetters of the soul, represented by the raised left leg of Shiva and His lower left hand in the gajahasta mudra (inviting "gesture of the elephant trunk").

The ring of fire (prabhamandala) in which Shiva dances is the palace of consciousness (chitsabha); in other words, the human heart filled with light, the central place of the manifested cosmos. Shiva, dancing, gives existence to the universe and takes it away, hides the Ultimate Reality for the majority, reveals it to the devotees who come close and recognize Parashiva, the Ultimate Reality, in the palace of their inner being. Indeed, we all dance with Shiva.

There are no less than seven types of Tandava in Hindu texts: Ananda Tandava, Tripura Tandava, Sandhya Tandava, Samhara Tandava, Kali (Kalika) Tandava, Uma Tandava, and Gauri Tandava. However, some scholars believe that there are even 16 varieties of this dance.

It is also believed that the dance was named Tandava from the name of Tandu, a skilled musician, devotee of Shiva. In later Hindu mythology, there is an version that Tandu himself was its author, who created it as a festive dance to be performed by Shiva and his wife Parvati after the feast.

The image of Shiva as Nataraja is of particular importance in the southern regions of India and is associated with Shaiva-Siddhanta tradition. In Tamil it is associated with the word Tāṇḍavam (Tamil: தாண்டவம்) and is also known as Tāṇḍava natyam.

“How many different dances of Shiva are known to his admirers, I cannot say. Without a doubt, the root idea of ​​all these dances is more or less the same, a manifestation of primordial rhythmic energy. Whatever the origin of Shiva's dance, over time, it has become the clearest way of God's activities, which any art or religion can boast."

The Hindu Scriptures tell of various occasions when Shiva or other gods performed Tandava. There is also "Shiva Tandava Stotra", the authorship of which is attributed to the demonic king of Lanka asura Ravana, a devotee of Shiva, which describes the power and beauty of the Deity.