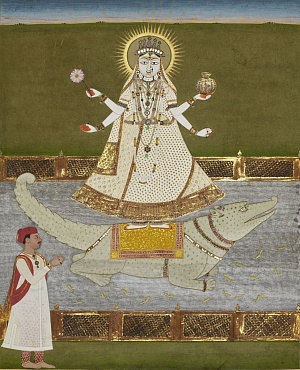 The great king in Hindu mythology, according to legend, brought Ganga from the spiritual world to Earth. The most complete description of the legend about Bhagiratha is contained in "Ramayana".

Bhagiratha was the ancestor of Rama, a descendant of the great emperor Sagara of the Solar Dynasty and the ruler of ancient Indian kingdom of Koshala. Bhagiratha kept the austerity of Brahma for a thousand years, asking to send down the Ganga waters to Earth and wash away the ashes of his ancestors in order to free them from the curse imposed by sage Kapila.

Delighted with the devotion, Brahma agreed to fulfill Bhagiratha's wish, but told him to also pray to Lord Shiva, since only he could bear the descent of Ganga from Heaven and protect Earth from destruction. Shiva put his head under the stormy downdraft, thus dissipating it, and the waters of Ganga, already calmer, reached the ground, flowing down his hair.


The legend on Bhagiratha is retold during Maha-shivaratri, glorifying Shiva's exploits. Bhagiratha is the section of Ganga from Gomukha to Devprayag. There is also a mountain named Bhagiratha in honor of the legendary king. In the Nath Tradition, King Bhagiratha is considered the founder of Ganga-panth; Shiva, pleased with his tapasya, appeared to Bhagiratha in the guise of Gorakshanath and initiated him into the teaching of the perfected.