Bhairavi is a tantric goddess who is part of the group of ten Mahavidyas (Dasha-mahavidya). One of the most frightening and destructive manifestations of the Divine Mother. Bhairavi is the consort (Shakti) of Shiva-Bhairava, at the same time she can be considered as a free and independent manifestation of Divine Energy.

As a rule, the Goddess is depicted naked (or in red robes), shining like a thousand rising suns, on her neck she wears a garland of severed heads, she has four hands, with one pair of hands she holds a rosary and a book – symbols of true knowledge and the divine word (paravach), the other pair is folded in a gesture of blessing and fearlessness. A crescent moon shines on her head, and her body is smeared with blood. Attributes may vary depending on the context. 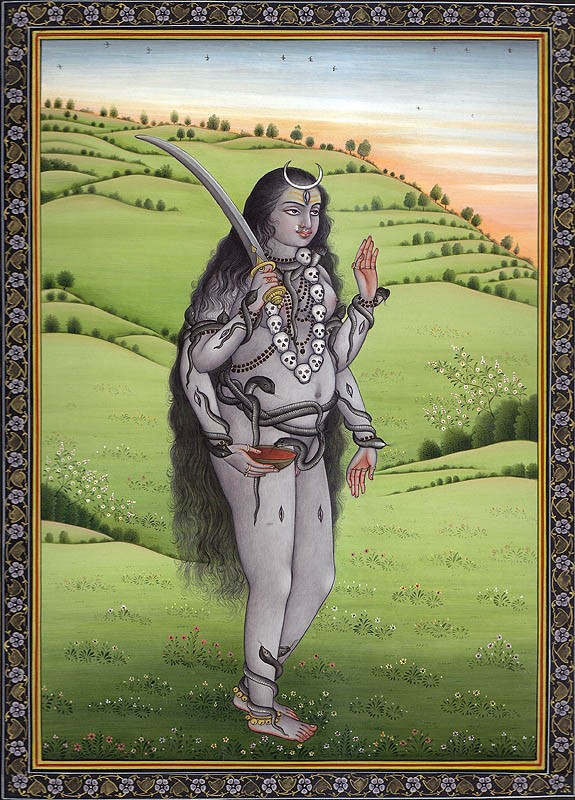 Usually, in various tantric texts and hymns in her honor, many amazing forms of the Goddess are described, whose names indicate various graces for the sadhaks devoted to her. In particular, it grants various kinds of siddhis and magical perfections, as well as the ability to control sexual energy, the power of fearlessness, protection from negative influences and cutting off worldly attachments.

By controlling tanmatras, she allows to control five kinds of gross elements and five kinds of perception. As kriya shakti, Bhairavi symbolizes the power of the ascending Kundalini, which is awakened with the help of Bhairava sadhana, characteristic of vamachara practices. In the yogic context, such sadhana is an internal work for the unification of prana and apana in the sushumna channel.

In the hymn "Sharada-tilaka", Bhairavi is described as a fire that consumes the entire universe at the end of each cosmic cycle, since at the levels of macro- and microcosmic processes she performs the threefold function of creation-preservation-destruction (srishti, sthiti, and pralaya).