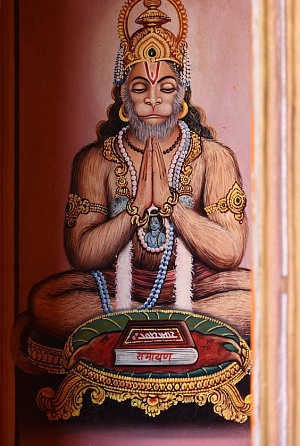 The panth, founded by Hanuman; spread in the South India and Sri-Lanka.

According to the legend on the way to the women kingdom, willing to set free his Guru, Gorakshanath met Mahavira Hanuman (he is known as a great warrior and a servant of Lord Rama). Hanuman guarded Matsiendranath and his kingdom. First they started fighting as average warriors when Hanuman realized that he was not a usual warrior, but a very experienced and mighty one. So Hanuman began to use different weapons: astra, mohanastra (the weapon of charming), bringing illusions and unbalancing the mind; Gorakshanath reflected with jnyananastra (the weapon of jnyana). Hanuman used vajrastra. Gorakshanath reflected it with indastra. Finally Hanuman lost his powers and fell on the ground. Gorakshanath defeated him.

Then Hanuman went to Rama and told him what happened. Asking why he, a great warrior and a servant of the God himself and the one whose strength is greater than of other Gods, was defeated by somebody named Gorakshanath. Rama replied: "Only Nath Yogi can be stronger than Gods. That is why you must become his disciple. Then you will completely understand the essence of military arts".

So Hanuman went to Gorakshanath and became his shishya. Gorakshanath imparted to him his knowledge that contains everything, including martial arts.