Lakini – Tantric Goddess, Yoginī, responsible for muscles, flesh (mamsa), and controlling manipura-chakra. She belongs to the Yogini group, which embodies the forces associated, on one hand, with the physical substances in the body (dhatu), and, on the other hand, with the subtle level of the chakras. In addition to Lākiṇī, the group includes Ḍākinī, Rākiṇī, Kākiṇī, Śākiṇī, Hākiṇī, and sometimes Yākiṇī.

The fundamental text "Rudra-yāmala", which is the source for many later tantras, contains descriptions of chakras and their inherent Goddesses, with each given her own stotra, sahasranama and practice.

The treatise on chakras "Ṣaṭcakra-nirūpaṇa" (21) says about Lakini, who is in manipur-chakra, the following:

Here abides Lakini, the benefactress of all. She is four-armed, of radiant body, is dark (of complexion), clothed in yellow raiment and decked with various ornaments, and exalted with the drinking of ambrosia. By meditating on this lotus, power to destroy and create (the world) is acquired. Vani (Sarasvati) with all the wealth of knowledge ever abides in this lotus. 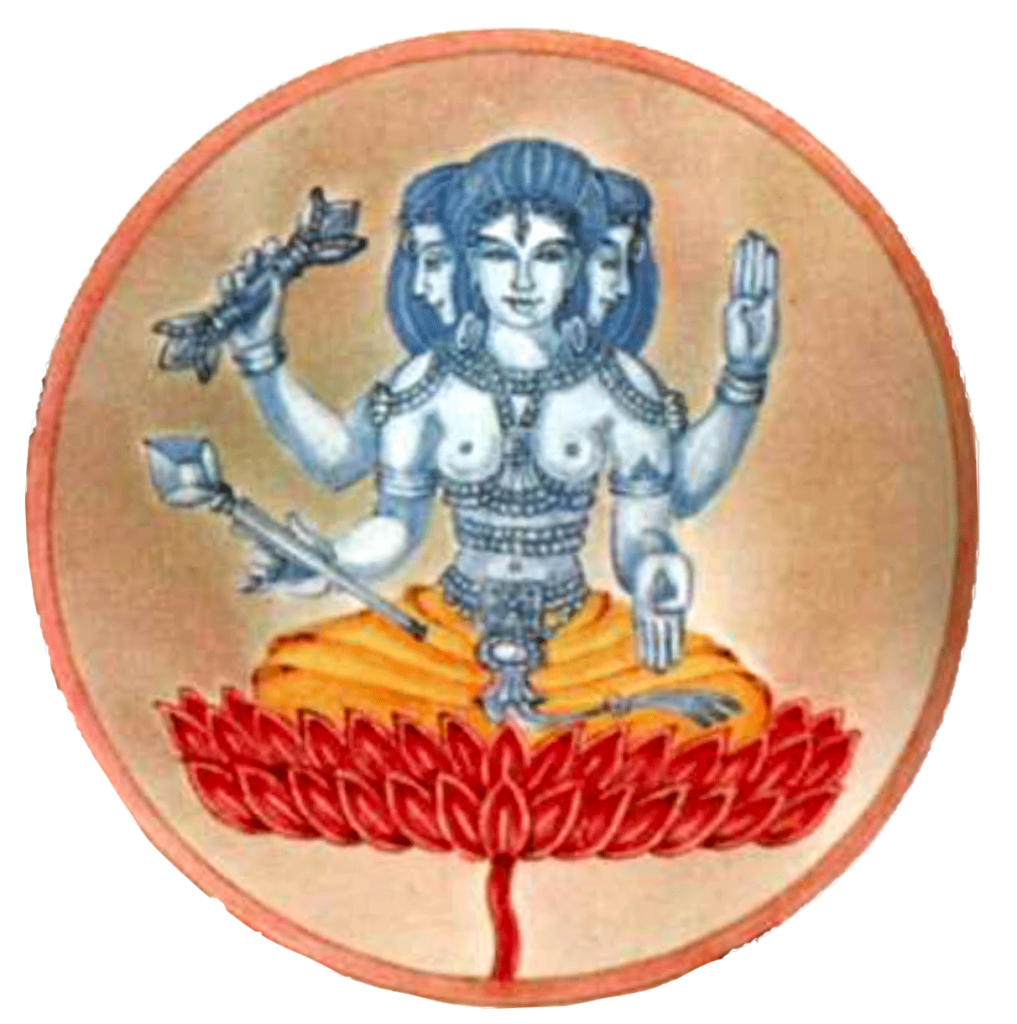 One of the commentators of this text, Vishvanatha, adds that Lakini has three faces, three eyes on each face, she is blue, has a fierce look and protruding teeth. In her right hands she holds the vajra and the Shakti (the weapon of Agni), and with the left hands she shows the Vara-mudra (bestowing good) and the Abhai-mudra (dispelling fear).

The texts of Shrividya Tradition (“Varivasyā-rahasya”, “Yoginī-hridaya”, “Tantrarāja tantra” and others) also place Lakini in manipura-chakra. Together with other chakra goddesses, she constitutes the subtle body of Kundalini-shakti (Lalita Goddess) and is worshiped in shodha-nyasa.

In "Lalitā Sahasranāma", several names of the goddess Lalita Tripurasundari refer to Lakini:

The goddess as the mother of Lakini (lākinyambāsvarūpiṇī-503) resides in the manipura-chakra (maṇipūrābjanilayā-495). She is three-faced (vadanatrayasaṃyutā-496), with vajra and other weapons (vajrādikāyudhopetā-497). Accompanied by Damari and other shaktis (ḍāmaryādibhirāvṛtā-498). With a face of red color (raktavarṇā-499), staying in the muscles (māṃsaniṣṭhā-500). She is very pleased when She is offered a meal mixed with jager (raw cane sugar) (guḍānnaprītamānasā-501). She is bestowing happiness to all devotees (samastabhaktasukhadā-502).

Finally, according to "Shrīmattotara Tantra", the text of the tradition of Kubjika, Lakini has a head of a vulture, eight hands, and likes to absorb flesh and alcohol. Together with other Yoginis she is located in Yogini-chakra (in the area of the throat). One of Ashtabhairavas – Chanda acts as Lakini’s consort.