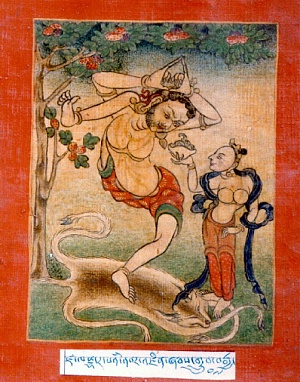 There are a lot of legends told about him. In some of them he is seen as Shiva, in others as the teacher of Bhartrihari (then Bhartrihari receives a special mark of naths-darshani from him in the middle of the ears known as kundals). At the end of his research Briggs put pao-panth to panths of Goraksha. However he mentioned that Jalandhar belonged to the earlier branch of the Tradition and described its followers, «jalandharipa», as a separate group. The scientist supposed that Jalandhar initiated «pa» -branch of yogis: «pa» is the Tibetian equivalent of the hindu word vālā (the suffix with multiple meanings: «the one that», «possessing it» and so on).

The ending «-pa», «-pav» instead of «-nath» in the names is not uncommon in ancient scripts. There we see «Minapa», «Gorakhpa», «Chaurangipa» and others as long as «Tilopa», «Marpa», «Naropa», «Karmapa» (those are names of naths written in a tibetian way with the names of buddist mahasiddhas). «-Nath» could displace «pa» with time. According to Briggs there are references to panaths (papnaths) who were part of Jalandharipa. «Pavak» could mean «preparing» fire. Jalandharnath, according to legends, was born from the flame of yajna.